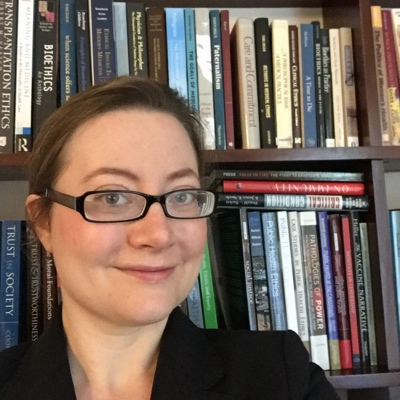 Dr. Karen Meagher graduated in Hamilton College in 2004 with a B.A.in biology. She received a PhD in Philosophy from Michigan State University in 2012, her dissertation was entitled A Virtue Approach to Public Health Ethics. While at Michigan State, she served as an undergraduate advisor in the Center for Ethics and Humanities in the Life Sciences, promoting and expanding an undergraduate interdisciplinary program in bioethics administered by the College of Human Medicine. She served as a reviewer on Institutional Review Boards (IRBs) for Michigan State University and the Michigan Department of Community Health. From 2012-2015 she worked on the staff of the Presidential Commission for the Study of Bioethical Issues as a Senior Policy and Research Analyst. While on the staff, she contributed to federal reports on such topics as privacy and large scale- genome sequencing; pediatric research ethics and medical countermeasures given the possibility of a weaponized anthrax attack; incidental findings in clinical, research, and direct-to-consumer settings; ethical and social implications of President Obama’s BRAIN initiative to advance neuroscience and neurotechnology; ethics and the 2014-2015 Ebola virus disease epidemic, and improving bioethics policy-making and ethics education in the United States. In August 2016 she joined the UNC Center for Genomics and Society as a post-doctoral research fellow.